Recently at one of our Wanderlust events, we had a guest who was not really ‘with the program’. Let’s call this guy “Schlemiel”. Schlemiel was straggling behind, inattentive to instructions, and dismissive of crew and other guests. He managed to independently tick off four members of the crew, me and N.D. included. Schlemiel’s efforts to fade into the background had the opposite effect as his behavior stood in stark contrast to the openhearted wonder that most guests exhibited.

What was with this person? Upon looking back through our records, we realized that Schlemiel had snuck past our vetting system. We didn’t have space for him when he RSVPed late. We communicated this to him clearly in advance. Since he stole his way into the event, Schlemiel wasn’t available for the gift we were offering. His inattentiveness posed a security risk to everyone in attendance.

It was telling that his behavior stood out to so many of our crew even before we realized that he had bucked our system. What he was there for was not what we were offering, and it was frustratingly apparent to many who encountered him. 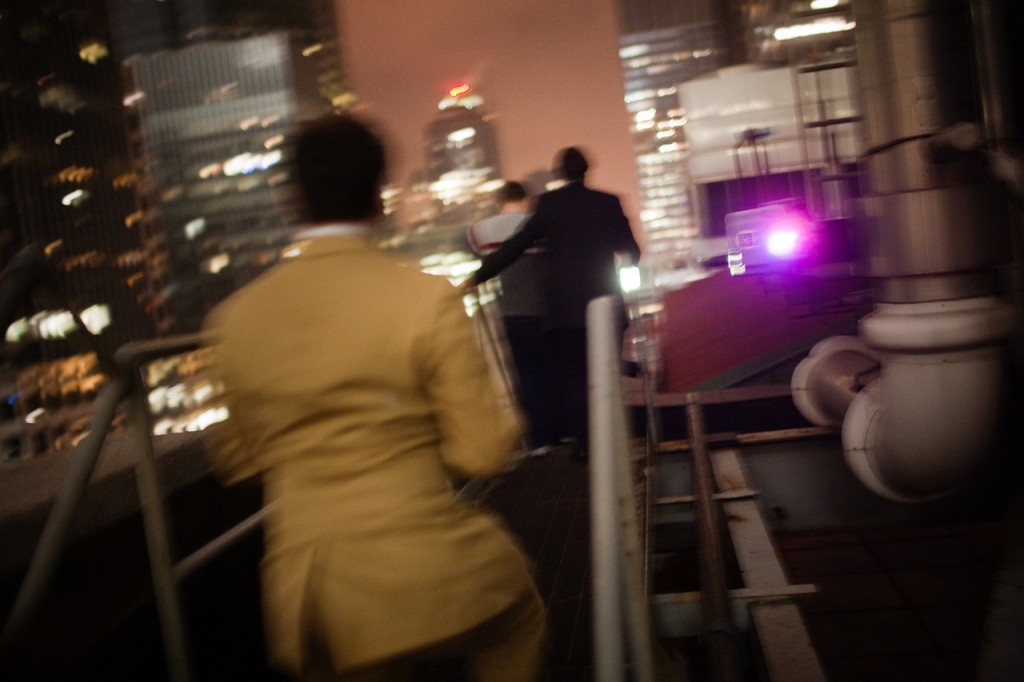 Being ‘with the program’ is not only important for recieving the gift; it’s important for ensuring everyone’s safety. Keep moving, people! Photo by Alan Chin.

Wanderlust events are gifts. (The Night Heron Speakeasy was also designed as a gifting experience.) We create gifts based on how spaces inspire us, and we design the experience to be received as an act of generosity. We play with the element of surprise, like unveiling a carefully wrapped present. We are at our most creative by asking ourselves what we want to give people in inviting them to transgress with us. Designing with a gift-giving mindset pulls us above our fears (of getting caught, being misunderstood, etc.) and personal needs (like recognition, making ends meet).

The ideal audience is one that will get the most out of the gift, either because it’s so far removed from their expectations or because if offers discovery and intimacy that will bring new flavors of awe into their lives. For example, guests who think they know what they are getting into are often least available for what we are offering. If these people are effectual and communicative, they might join our crew and are happier there as gift givers than receivers.  We often call our crew members stewards. They are collaborating in delivering a gift and ensuring the safety of our guests. It is an act of service rather than a performance.

A Few Examples: TimCon28 and The Night Heron

Friends and random contacts often ask us to design custom events. There’s a clear, consistent division between opportunities that capture our imagination and those that don’t. If the event is not a gift in some way, it’s a struggle to be interested, no matter how good of friends we are or how much money is being thrown at us or what curious locations are involved.

Take the Timothy Convention as a positive example. Our good friend John Timothy approached us about doing something better than renting out the neighborhood game shop to host his birthday party. JTim was not interested in using his birthday to make him look cool and guilt his friends into showing up for another mediocre hang out session. Quite the contrary. He wanted to give his friends an awesome experience. The TimCon was about respecting his friendships by using the occasion to give the people closest to him an unexpected adventure. The end result—TimCon28—was a blast. 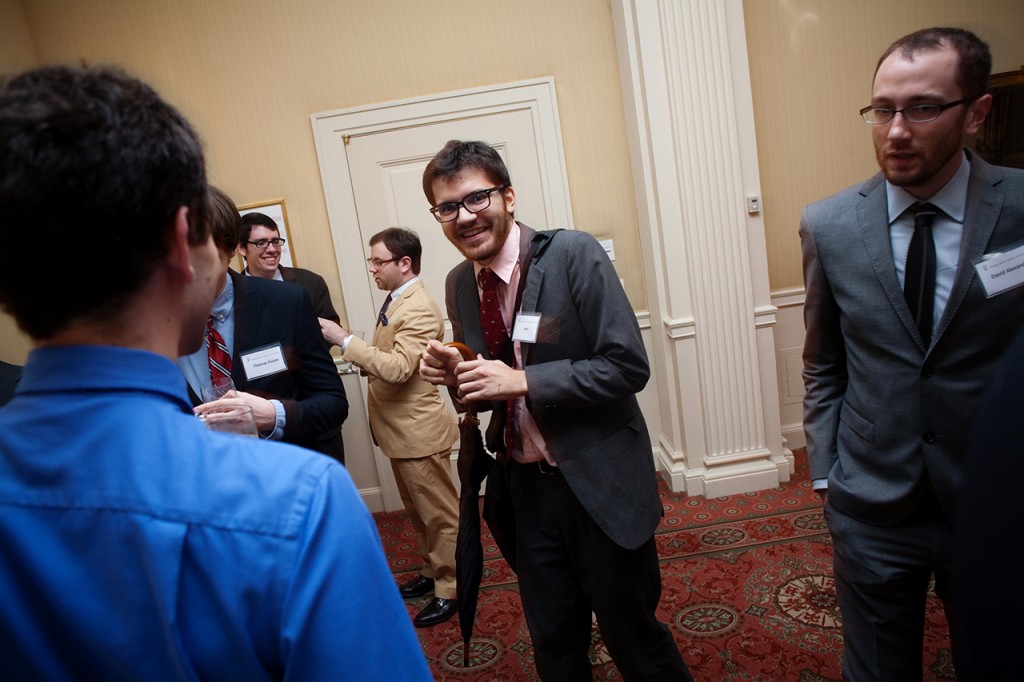 John Timothy with friends at the Waldorf Astoria during TimCon28. Photo by Alan Chin.

Wanderlust creates particular kinds of gifts – of adventure, discovery, wonder, intimacy, transgression. Some folks want a gift of a beautiful experience but are not actually down for some serious transgressive adventure. Those people invariably get a little scared as soon as N.D. and I start ideating. They usually don’t stick it out through the process.

Our events are free because we haven’t figured out how to square charging money with keeping guests in the mindset of receiving the experience as a gift. The transactional nature of paying for the right to attend an experience often instills a sense of entitlement that closes off people’s ability to transcend their own expectations to receive what is offered.

The Night Heron found a brilliant way around the money issue by asking guests to be both receivers and givers of the gift. As described in the Atlantic’s Into the Water Tower, With Flair:

“One of the things I wanted to do,” says Austin, “was give people the ability to share the experience itself. Exposure had to be limited for security reasons, so the only way you could share it was by passing it on to a person.” Guests could attend the Night Heron only once, and entrance had to come in the form of a gift from one who’d already been. At the end of a seating, a letter thanked guests and explained that gifts of watches providing entry for two were available for purchase if desired. The price was $80 at the beginning of the run and capped out at $300 by the end, with the average price hovering around $160, according to Austin.

The system was supremely practical for vetting guests, as anonymous channels like the Internet can easily bring thieves, groping drunkards, or gossip column reporters, potentially jeopardizing the experience for all. But beyond mere practicality, says Austin, “The effect was more powerful than anything I would have expected.” 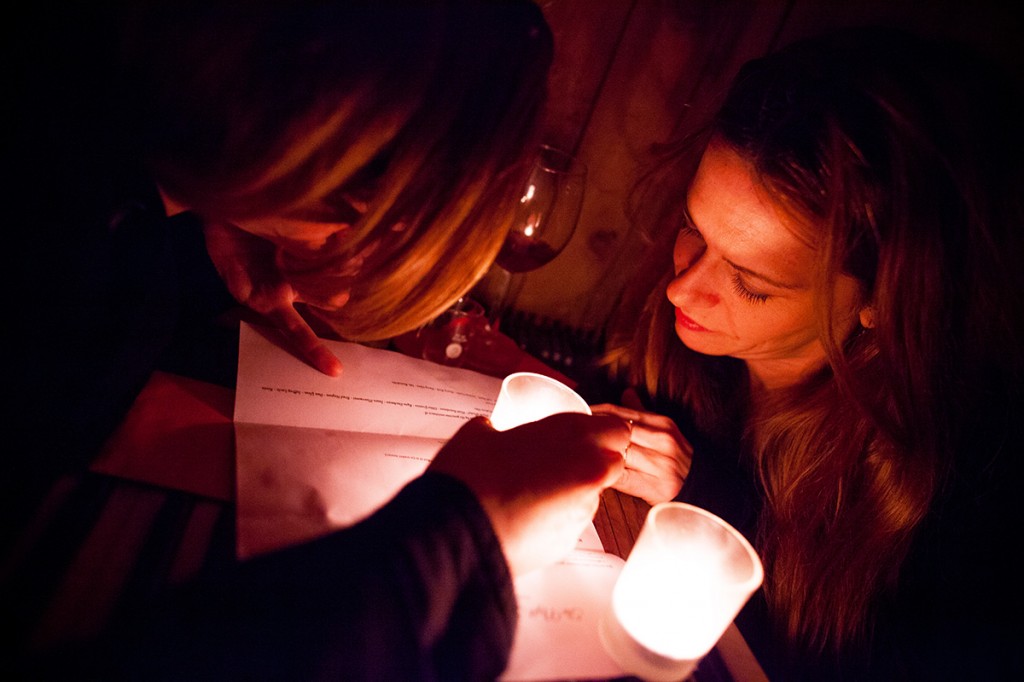 Guests at the Night Heron read the thank you letter that explains the gifting process. Photo by Yoni Brook.

Much of the press about the Night Heron describes it as an exclusive experience. ‘Exclusive’ is a gripping term to catch eyeballs wandering the internet. Like the Gothamist’s overheated take in Chelsea Water Tower Transformed Into Exclusive Speakeasy:

“To get to this hidden oasis, would-be imbibers had to present their ticket, which came in the form of a pocket watch that was gifted to a lucky few… Photography and Tweeting were verboten inside the tower, but here’s some sick video of the raucous party that you weren’t invited to…”

The Night Heron was an intimate experience of limited capacity designed around generosity (among other things). But ‘exclusive’ (read: exclusionary) connotes insider/outsider relationships and aggravates a sense of missing out. This is not how the Night Heron’s gifting access system was structured. The New Yorker accurately pinned the Night Heron as neither exclusive nor inclusive, but democratic:

“The crowd on a recent evening (six couples) included the owner of two gay night clubs; a twenty-five-year-old Dutch gallery worker, who had brought her roommate as a birthday present; and a young couple from Hoboken… Austin is quick to point out that the guest list at the Night Heron is democratic, and he never knows who’s going to show up.” – From Tower Heist

‘Exclusive’ is the opposite of generous, but a good gift is not for just anyone. A gift is specifically for the person receiving it as a product of the relationship between the giver and the receiver. By bucking our system, Schlemiel failed to establish a relationship with us and missed out on the gift.